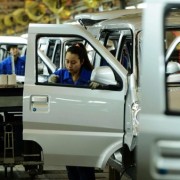 General Motors’ largest China joint venture will establish a new plant in Indonesia, in the latest example of an automaker in the world’s biggest car market venturing overseas.

SAIC-GM-Wuling, a joint venture between GM, Shanghai-based SAIC Motor and Wuling Motor, confirmed on Monday that it would begin building a new factory this year to manufacture Wuling brand vehicles for Indonesia and other Southeast Asian markets, challenging Japanese carmakers’ grip on the region.

Construction of the new facility near Jakarta is targeted to begin in 2015, subject to relevant government approvals. Vehicles will be sold primarily in Indonesia, with the potential to export to other ASEAN markets in the future. Additional details about the new facility and its products will be announced at a later date.

At the weekend, Indonesia’s minister for industry said that Wuling would invest $700m in an assembly plant with an initial annual production capacity of 150,000 vehicles. According to the state Antara news agency, production is expected to begin in 2017.

Wuling declined to confirm the value or scale of the investment, saying only that the facility’s “vehicles will be sold primarily in Indonesia, with the potential to export to other [Southeast Asian] markets”.

After state-owned Dongfeng Motor paid €800m for a 14 per cent stake in France’s Peugeot last year, the two companies said their strategic partnership would focus on Southeast Asian markets.

Chinese carmakers led by private sector groups such as Geely and Great Wall have traditionally targeted export and assembly operations in developing markets, such as Russia, Ukraine, Iran and Chile.

The more recent push by large state-owned groups such as SAIC Motor and Dongfeng represents a new stage in the evolution of China’s auto industry.

By investing in Indonesia in co-operation with SAIC and Wuling Motor, GM will have a lighter capital expenditure burden as it attempts to gain a foothold in a market dominated by Japanese automakers, which account for more than nine out of every 10 vehicles sold.

But as multinational carmakers such as GM and Peugeot begin to target developing markets via their China joint ventures, they will have to guard against competition with their own brand cars. GM already sells Chevy vehicles in Southeast Asia’s largest market.

Wuling, based in the southwestern province of Guangxi, is GM’s largest China joint venture. It was the first vehicle manufacturer in China to sell 1m vehicles a year — in 2009 — and in 2014 increased sales 13 per cent to almost 1.8m units. GM’s overall China sales reached 3.5m units last year

Separately, GM and SAIC operate another 50-50 joint venture based in Shanghai.

Sandvik Coromant and Aerospace In Singapore
Scroll to top